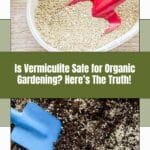 Organic gardening can sometimes be tough. It comes with a specific set of rules, and each plant is different and has its own needs. Vermiculite is often added to soil mixes to help plants thrive in different situations, but how safe is organic gardening?

As a general rule, vermiculite will not add any possible toxins to the soil that could affect the plants or vegetables growing in it. However, the use of vermiculture in organic gardening isn’t always necessary.

Before adding anything to your soil, it’s important to know what it does and the effect it will have— especially if those plants are going to end up on your dinner plate. Below is a breakdown of the role vermiculite plays in organic gardening and exactly how safe it really is.

Is Vermiculite Safe to Use in Organic Gardening?

Vermiculite is a natural substance that is odorless, non-toxic, and does not deteriorate over time, making it an excellent choice for organic farming.

Since vermiculite is also used in the building industry and in packaging, it’s best to buy vermiculite that has been prepared specifically for horticultural use. Small and medium-sized bags of vermiculite can be found at nurseries, garden centers, and home improvement stores.

Although vermiculite isn’t toxic, some people may be concerned about breathing in the dust. When you’re working with vermiculite, it’s always best to use a protective mask and dampen it, so the particles don’t get in your eyes or nose.

Vermiculite is a naturally occurring mineral (magnesium-aluminum-iron silicate) that, when mixed with water, expands into a worm-like shape to help the soil retain water.

Vermiculite is lightweight and does not deteriorate over time. It can absorb three to four times its weight in water, making it useful for potting up plants that need soil with higher water retention. It also attracts various plant nutrients like potassium, magnesium, and calcium.

If you’re buying horticultural vermiculite sold in stores today, then it does not contain asbestos and is safe for your garden. At one time, however, there were traces of asbestos in vermiculite, and it still may exist in areas like the attics of old homes.

From 1919 to 1990, about 70% of commercial vermiculite in the US came from a mine in Libby, Montana. With this mine came asbestos which contaminated the vermiculite that was produced and sold. This product was primarily used for insulation and was sold under the brand name Zonolite.

Another concern with organic gardening is how the materials you are using will impact the environment.

The good news is that vermiculite is not only safe for your vegetable garden, but it’s also safe for other species. Birds and other animals can tell what they can and can’t eat to consume anything from it. Vermiculite is also a naturally occurring, non-toxic mineral, so it’s not going to damage the soil or water nearby.

The downside is that vermiculite comes from a non-renewable source. While there is an abundance of vermiculite available—enough to last more than a few lifetimes—it will eventually run out, so it’s something to keep in mind.

Vermiculite is not a plant-based material, which means it can’t decompose in a compost heap. It may shatter into smaller fragments if it gets worn down by abrasive substances. In compost, it would have a similar effect as in soil media by promoting water retention.

Vermiculite is typically used for plants that need soil that never dries out. This material acts like a sponge and can absorb up to four times its volume of water, which means it will be more likely to stay moist even in areas with considerable air circulation.

Vermiculite can be used in both garden beds and potting soil. In order to give plants a quick start, adding vermiculite to the mix will improve moisture retention and aeration of the soil. Using vermiculite also helps the plant absorb minerals like potassium, ammonium, magnesium, and calcium from the soil.

Vermiculate is a particularly good substrate to use when you want to grow seeds faster. Its benefits include the ability to anchor the seedlings’ root systems as well as helping them absorb moisture from the soil better. Also, it works well both separately and mixed with potting soil.

Vermiculite can be used for seedling, raised beds, planting flowers in containers, on lawns, for a soil amendment because of its water-retaining properties. But that’s not all this material is good for.

Some of the benefits of using vermiculite include:

When Not to Use Vermiculite

Vermiculite is not always the best option for gardeners, especially when it is mixed with clay soil. This type of mixture might become too wet or soggy. It also reduces airflow around the roots of the plant, making it difficult to grow any plant with this heavy mixture.

It’s best to avoid using vermiculite with plants that need to dry out in between waterings. Vermiculite retains moisture, so it’s not ideal for many indoor plants. For all the succulent lovers, this material probably isn’t for you! Root rot is a problem that can be caused by cold, wet roots. This can lead to bacterial and fungal root diseases that affect your plant’s growth.

Vermiculite is a naturally occurring mineral that you can use by itself or in combination with other growing mediums to help keep plants healthy and grow well. It improves soil and makes it more hospitable for plant growth. It also prevents overwatering or under-watering by ensuring the roots have the moisture they need.

While it can’t be counted as a renewable resource, it is a non-toxic material that is safe for organic gardening if you wish to use it.