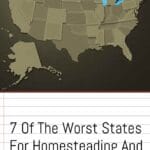 As the cost of living increases and food security is less certain (GMO’s and Pesticides), many of us have taken it upon ourselves to live as homesteaders. For anyone who can make the change, there is no reason not to; however, for those who live in certain states, the practicality of homesteading is more difficult. Below are 7 of the worst states for homesteading and why!

New Jersey, New York, Alaska, California, Connecticut, Nevada, and Hawaii are seven of the worst states for homesteading when examining factors like climate (bad for crops or livestock), local laws that prohibit or inhibit homesteading, the cost of purchasing land, and urbanization.

These seven states are considered the least ideal for homesteading and self-sufficient living (although there are exceptions to the rule). But why exactly were these seven states singled out? And are there any redeeming qualities to them?

The Worst Homesteading States And Reasons Why

When determining which states are the “worst,” it becomes a particularly subjective matter. Each person has their own set of standards when evaluating a state and what makes them good or bad.

If we look at homesteading and what it tries to achieve, we see that some of the common objectives are:

These are some of the priorities for those who choose to live as homesteaders; this list is not, however, exhaustive.

With these factors in mind, when we evaluate which states are the worst for homesteading, we are looking at factors that hinder these “goals,” which include:

The Worst States For Homesteading

Below are some of the worst states to try and homestead in, in descending order, as well as the reasons why they make the list.

At the top of most lists for the worst state to try and homestead in is New Jersey.

New Jersey is located on the East Coast, and it stretches for around 166miles North-South, and 65 miles West-East (at its widest) (around 5.6 million acres in size), with a population of 8.8 million people.

The biggest factors playing against this state are:

New Jersey has an average summer maximum of 860F and a winter minimum of 180F.

This state also receives around 27 inches of snow annually, with an annual rainfall of between 40 and 51 inches annually.

One of the highest in the country, many state residents complain about the exorbitant property taxes. Out of 100, New Jersey scores 120 on https://www.bestplaces.net/, in terms of cost of living.

Regulations on “clean” energy are stringent, making it difficult to shift to an off-grid lifestyle.

The big issue in NJ is that the cost of living is just too high, along with the cost of purchasing land (approximately 40% greater than the national average).

The other issue is that the groundwater in this state, although plentiful, is contaminated in some areas.

The “Big Apple” is next on our hit-list of “unfavorable” states regarding homesteading.

Covering an area of around 305 square miles, New York is located along the East Coast and has a population of around eight million.

Some of the factors counting against New York include:

New York has a summer maximum of 840F and a winter minimum of 270F.

The average rainfall for this state is 44 inches, with around 50 inches of snow received annually.

In the USA, New York is a state with one of the highest costs of living. According to https://www.bestplaces.net/, New York scores 187, compared to the generalized score for the USA of 100.

The regulations and laws in the state of New York make living in an off-grid way challenging. You are legally not allowed to install “off-grid” solar systems. There are some legal ways around this, but they are not well defined.

Other utilities like water and waste are also challenging, as they want you to remain connected to wastewater for showers and sinks.

Although the climatic conditions are not too severe or adverse, they are still not ideal for farming enterprises, nor does the weather lend itself to solar power so well. The biggest issue with New York is the cost of land, along with the taxes.

Another factor against this state is the large population size, which has no direct effect on homesteading, but it means that space and privacy are limited.

The northernmost of all states, Alaska is located on the North West Coast, and it is 424.5 million acres in size.

The population of Alaska is, however, relatively small at around 730 000 people.

The factors counting against Alaska include:

Alaska is divided into several climate regions. The southern coast and southeast Alaska experiences average temperatures of between 400F and 600F in the summer and 200F to 400F in the winter.

This area experiences an average annual rainfall of around 60 to 160 inches.

Some of the highest rainfall found in Alaska is 220 inches and greater. These areas also tend to experience up to 200 inches of snowfall.

Much of Alaska is characterized by strong winds and frequent thunderstorms. With even more severe conditions as you move north to the Arctic.

Land in Alaska is relatively affordable at $3500 to $4000 per acre, making it one of the cheapest per acre on this list!

According to https://www.bestplaces.net/, Alaska has a rating of 126, putting it on par with New Jersey in how expensive it is to live there.

Alaska’s regulations are not too bad in terms of living off-grid. Converting to solar power is allowed but may be of little use when there is insufficient sunlight to operate the systems.

The two biggest issues facing homesteading in Alaska are the cost of living, and most importantly, the climate. The harsh conditions don’t allow for much in terms of agriculture.

Furthermore, this state is quite dangerous, with wolves, bears, and the weather, making an isolated lifestyle less ideal.

California may be a popular holiday destination, but that doesn’t save it from the worst homesteading states list.

At roughly 163,696 square miles, this West Coast state has a population of around 39.51 million people.

Here are some of the factors counting against homesteading in California

Most of California has a Mediterranean climate, characterized by cold (mildly) wet winters and hot, dry summers.  The highest summer temperature is around 62.90F, while the winter minimum is 41.30F.

Due to California’s composition, there is a large dichotomy in land prices.

Un-arable land located in the desert areas is quite cheap, while useful land closer to the cities is valued at $39,092 per acre.

The most expensive areas can reach up to $6.9 million.

The cost of living in California is also one of the highest in the US. According to https://www.bestplaces.net/cost_of_living/state/california, the rating given is 150, compared to the USA standard score of 100.

Regulations in California have changed, allowing for solar systems to be installed . However, there are still stringent guidelines to follow.

Water and waste are less severe in how they are regulated.

The biggest downside to homesteading in California is that the taxes are incredibly steep. This state has some of the highest gas taxes, while other taxes are not far off.

Land price, cost of living and periodic water shortages, and subsequent restrictions make for tough conditions to try and live off the grid.

The East Coast state of Connecticut is 3.5 million acres in size, with a population of 3.6 million people.

Some of the factors counting against homesteading in Connecticut are:

There is an average annual rainfall of 50.2 inches and snowfall of 37.2 inches.

The cost of land in Connecticut ranges from around $128,824 per acre to $1.5 million, making it one of the more expensive states to purchase land.

The cost of living in Connecticut is not that far off what the average American experiences.

According to https://www.bestplaces.net/cost_of_living/state/connecticut, this state has a score of 108, compared to the standard 100 for the USA.

The regulations in Connecticut allow for installing off-grid solar systems while disconnecting from the water mains and harvesting rainwater are also not opposed .

Overall, Connecticut is not at the top of the “worst pile,” but the cost of land is quite a determining factor.

The climate also has a few drawbacks, as it does not lend itself to easily growing certain crops without extra expenses (e.g., greenhouses).

The Western State of Nevada is approximately 71 million acres in size, with around 3.08 million people.

Some of the biggest factors counting against homesteading in Nevada include:

With an average annual rainfall of 10.3 inches, this is one of the driest areas in the US.

Within Nevada, there is quite a range of prices when purchasing land. In less arable areas, the cost is quite low, around $170 per acre, while closer to towns and water sources, it moves up to around $2 116 and more per acre.

According to https://www.bestplaces.net/cost_of_living/state/nevada, Nevada has a rating of 111 in terms of cost of living.

Although it is permissible to live off-grid in Nevada, you will first need to acquire the correct permits to disconnect from the grid.

Harvesting rainwater was illegal until recently, but now it is okay to do so within specific restrictions and guidelines, limiting water availability.

The most obvious shortcoming for homesteading in Nevada is the harsh, hot, dry climate. The environmental conditions prevent many agricultural activities in this state.

Aside from these adverse conditions, the laws and regulations that need to be adhered to are restricting, while the cost of living can be quite high, as is the purchasing price of land closer to towns.

The last state on our list is a bit of a wild card. Mainland Hawaii and the surrounding islands are approximately 7 million acres in size, with only 2 976 people!

Some factors counting against this tropical paradise in terms of homesteading are:

The yearly average rainfall for Hawaii is 49 inches.

Hawaii’s land prices are a bit astronomical, starting at around $10 000 to $20 000 per acre and increasing as you move to more popular areas by the ocean up to around $1 -2 million for half an acre.

According to https://www.bestplaces.net/cost_of_living/city/hawaii/honolulu, the cost of living in Hawaii is rated at 170, one of the highest of all the states.

The mark-up on general items, like bread and potatoes, is a lot because many items need to be shipped to the state.

Many locals are already living off-grid in Hawaii, but mostly because there is little infrastructure in terms of electricity and water when you move out of towns.

It is also easy to get approval for water and waste.

Hawaii would be the perfect state to homestead; unfortunately though, due to the cost of land and living expenses, Hawaii may not be feasible for some people even to consider.

The other factor related to Hawaii is the active volcano looming in the area. This adds a huge safety risk, which could be a turndown for many.

When it comes to the worst states for homesteading, it’s difficult to say which ones are the worst. There are people successfully homesteading across most of the states. Some states are, however, genuinely easier to homestead in and live off the grid than others. Most of the examples on this list are not due to environmental factors but instead the cost of living, the cost of land, and regulations that have been put in place.