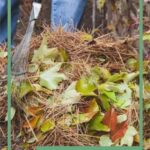 Pine trees drop thousands of needles each year. If you have pine trees on your property, you’ll probably find yourself looking for a way to get rid of them. Because they are so numerous—and free—you may wonder if pine needles are good for compost.

Why Should I Add Pine Needles To My Compost?

To create a healthy compost pile, it’s important to have a mixture of both brown materials (carbon-rich) and green materials (nitrogen-filled). Pine needles are considered brown material. Since pine trees drop needles year-round (unlike deciduous trees, which only drop leaves in the fall), they provide a constant source of carbon for your compost pile.

Brown compost materials like pine needles help to create aeration in the compost pile. Because they break down very slowly, they aren’t easily compacted by the weight of the compost. This increase in aeration allows the compost to reach high temperatures, which speeds up the process of decomposition.

What Are The Drawbacks To Using Pine Needles In My Compost?

While pine needles can help create a quickly-decomposing compost pile, there are drawbacks to utilizing them.

The greatest concern with using pine needles in compost is the length of time required for the needles to break down. According to The Denver Post, pine needles are one of the slowest types of mulch to decompose.

Adding pine needles to your compost pile will help them decompose more quickly, but they can still take a significant amount of time to completely break down. This means that you may have pieces of pine needles still in your compost when the rest is broken down and ready to use.

Because of this, you should limit the amount of pine needles to about 10% of the materials in your compost pile. Any more than this risks disrupting and slowing down the composting process.

Are The Rumors About Pine Needles Making Compost/Soil Acidic True?

It is true that pine needles are very acidic. With a pH ranging from 3.2-3.8 when fresh, it’s easy to understand the fear of using pine needles in compost intended for plants that thrive in neutral-pH environments.

However, pine needles don’t stay this acidic for long. According to Oregon State University, microbes on the ground begin to neutralize the pH level of the pine needles as soon as they fall.

How Can I Best Utilize Pine Needles In My Compost?

To capitalize on the benefits of using pine needles in your compost, here are a few things to keep in mind:

What Else Can I Use Pine Needles For?

In addition to being good for compost and helpful for retaining moisture underneath your pine trees, pine needles make good mulch for your garden plants.

Many gardeners fear that using pine needles as mulch in their gardens will acidify the soil, keeping plants that need neutral soils from thriving. However, as mentioned above, pine needles lose their acidity quickly. If you leave them underneath the tree for a season, they won’t acidify your garden soil.

In addition, pine needles are a long-lasting mulch option for your garden. Since they take several years to break down, you won’t have to replace your mulch each year. You shouldn’t rototill your needles into the garden at the end of the season since they take so long to decompose, but you can add a few to your compost pile when they start to break down.

Of course, one of the greatest benefits of using pine needles as mulch in your garden is the fact that they are abundant and free. While grass clippings are readily available as well, they can become compacted and stinky, making them less ideal. Pine needles offer your plants protection while smelling pleasant.

Pine needles are a great addition to your compost pile. While they should be used sparingly, and ideally after a season or two of acting as mulch for your trees or garden plants, they provide beneficial carbon and aeration to your compost.

The next time you start to notice a pileup of pine needles in your yard, try using them as protection and nutrition for your plants instead of discarding them.