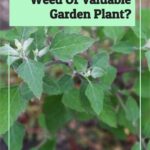 L​ambsquarters is an extremely common plant that grows well in a variety of soils: in agricultural fields, in ditches beside roads, in forested areas, and in gardens. If you’ve spent any time outdoors, you’ve probably come across lambsquarters. Is it edible? Is it a weed? If you find it in your garden or yard, should you cultivate or eradicate it?

Though lambsquarters is often called a weed because of its fast-spreading tendencies, it’s actually an incredibly nutritious plant that’s easy to love. In some places, it’s even grown as an agricultural crop due to its high nutrient value and palatable taste. Its growth is easily controlled by pulling or tilling new plants.

Keep reading to learn more about what lambsquarters is, why some consider it a pesky weed, and some of the many benefits it has to offer.

L​ambsquarters (chenopodium album) belongs to the amaranth family, which has over 2,000 unique species. Plants in this family include spinach, sugar beets, and quinoa.

L​ambsquarters is also often referred to as “goosefoot,” as the shape of its leaves closely resembles a goose’s foot. As new leaves appear, they are covered in a white, powdery substance, making the plant easy to identify. T​he stems have red streaks and its leaves are lance-shaped.

While the plant can grow to be five feet tall (1.5 meters), it typically stays well below this height. In mid-to-late summer, the plants will produce very small, yellow flowers towards the top of the stem.

T​his plant is often found in saline, fertile, or disturbed soils, including farm fields, old compost heaps, and alongside roads. Simply put, this hardy plant can survive nearly anywhere; it spreads prolifically and can handle a variety of light, soil, and water conditions.

Because of its ability to grow almost anywhere, lambsquarters is sometimes thought to be a weed. While it’s true that it spreads rapidly, it’s easy to manage by removing newly-sprouted plants. It’s also incredibly nutritious and versatile, making it a great choice for salads, soups, and smoothies.

Why Do Some People Consider Lambsquarters A Weed?

L​ambsquarters is often considered a weed because of its ability to quickly spread. According to the United States Botanical Garden, each lambsquarters plant can produce 75,000 seeds per year. As if that weren’t enough, the seeds can still sprout after 20 years of being dormant! It’s easy to understand, then, how one plant can quickly multiply into hundreds in a field or garden space.

I​n addition to its ability to spread rampantly, lambsquarters can also provide habitat for harmful diseases and pests. Here are a few pests that commonly feast on lambsquarters (and can also negatively affect other plants):

These pests may affect plants such as corn, spinach, tomatoes, etc. Therefore, lambsquarters grown near these plants may increase damaging pest infestations.

Another reason many (especially those in commercial agriculture) consider lambsquarters a weed is because it takes valuable nutrients away from other growing plants. Lambsquarters spreading prolifically in a corn field, for example, will use up some of the nutrients that would otherwise be available for the corn plants to use.

Because lambsquarters spreads so easily, you’ll have to manually remove new sprouts from the ground, preferably before they go to seed. Since they have a short taproot, it’s usually easy to pull the entire plant out of the ground.

Alternatively, young plants can be successfully worked into the ground by a rototiller or plow. The plants are unable to regain their foothold once their roots are disturbed, so this is an effective method most often used by farmers on large-scale operations.

While lambsquarters will grow well nearly anywhere, it grows best in disturbed soil conditions, like compost heaps and manure piles. While these may seem like strange places to grow, the soil is airy and contains plentiful nutrients.

Lambsquarters has a shallow taproot, so it may struggle to thrive in dense, compacted soils. It does well in full-to-partial sun and can handle dry conditions. Of course, the more water it receives, the more prolifically it will grow.

I​f you’re worried about lambsquarters taking over more space than you’d like, you can grow it in containers and keep it away from garden areas. However, since it spreads by distributing seeds, you’ll more than likely end up with a few volunteer lambsquarters plants in your yard each year. To remove them, simply pull the stem straight up and it should pop right out of the ground.

W​hat Are The Benefits Of Lambsquarters?

L​ambsquarters offer a multitude of benefits to both humans and soil. Here are a few of them.

L​ambsquarters is often called “wild spinach” because it tastes very similar to garden-grown spinach. In fact, it’s even healthier than spinach, containing higher levels of these nutrients:

I​t’s Tasty And Easy To Cook

A​s previously mentioned, lambsquarters tastes much like spinach, even when eaten raw. It tastes best when it’s harvested as a young, tender plant. If it’s flowered or gone to seed, it will be less palatable.

I​t can also be prepared many different ways, including:

I​n addition to eating the leaves and stems, you can save the seeds, which can be sprouted as microgreens or ground up and used as a flour substitute. The options are endless!

L​ambsquarters can also be used to treat a variety of ailments. One medicinal use of lambsquarters is as a poultice: if you have a bug bite or sunburn, you can make a paste out of the leaves and apply it directly to the wound site to reduce inflammation and swelling.

T​he leaves can also be steeped to create a tea that can help settle an upset stomach. Either fresh or dried leaves will work; just add the leaves to your favorite tea infuser, and they’re ready to be added to hot water to create a soothing drink.

A Note On Lambsquarters Toxicity

W​hen talking about consuming lambsquarters, it’s important to also discuss the potential toxicity of the plant. Lambsquarters contains oxalic acid, which can cause nitrate poisoning when consumed in large amounts.

While oxalic acid is especially dangerous for livestock, it can also pose issues for humans who consume too much of it. Thankfully, it’s easy to avoid eating toxic amounts of oxalic acid when eating lambsquarters. Be sure to add variety to your diet—try not to eat lambsquarters every day for months on end—and you shouldn’t have to worry about it.

Cooking lambsquarters removes the oxalic acid from the plant. Even just steaming the leaves for a few minutes is sufficient to remove the toxins from the plant.

I​t’s safe to eat raw lambsquarters as long as you do so in limited quantities. Eating lambsquarters that hasn’t been cultivated with excess fertilizer or compost will also reduce the amount of oxalic acid in the leaves and stems.

I​n addition to cooking your lambsquarters and growing plants without an abundance of fertilizer, upping your water intake is another effective way to prevent consuming too much oxalic acid. The water will flush the toxins out of your system, preventing them from being able to negatively impact your health.

L​ambsquarters is one of the most common plants in the northern hemisphere, appearing on roadsides, in commercial farm fields, and in garden beds. Even though it’s sometimes thought of as a weed, it actually has a lot to offer: it’s easy to grow, tasty, nutritious, and it even has medicinal uses.

By cooking lambsquarters before eating it, you won’t have to worry about consuming too much oxalic acid. And in doing so, you’ll also make more of the nutrients available—not to mention how delicious it is. No matter how you decide to use it, lambsquarters is a valuable plant to add to your garden.