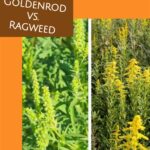 It’s late summer and the last of the warm weather flowers are blooming – so are your allergies. Goldenrod and ragweed are growing side by side along the road and in your backyard. They’re both the same thing, right?

Goldenrod and ragweed are two different plants. Goldenrod is a perennial that sports bright yellow flowers with pollen that attracts pollinators such as bees and butterflies. Ragweed is an annual that has inconspicuous flowers with lightweight pollen that is typically borne on the wind.

Ragweed is to blame for all of those allergies you suffer from, even though goldenrod gets all the flack. In this article, we will review the different families these two plants come from, how their pollen differs, the differences in their physical appearance, and the different medicinal uses of each.

What Is the Difference Between Goldenrod and Ragweed?

Goldenrod and ragweed are both flowering plants that bloom in late summer to early fall but come from different families. Goldenrod lives for more than two years while ragweed only lives during the course of one year.

Goldenrod has conspicuous yellow flowers that produce nectar to attract pollinators so that its seeds can be spread to other areas. On the other hand, ragweed does not have noticeable flowers and its method of pollination relies on the wind.

Most people suffer from hay fever around the time that both goldenrod and ragweed bloom. They tend to blame their allergies on goldenrod, perhaps because the flowers are visible, but ragweed pollen is really the cause of hay fever. Goldenrod has nothing to do with common allergies.

Are Goldenrod and Ragweed from the Same Family?

Goldenrod comes from the genus Solidago and comprises over one hundred different species of flowering perennials that are common to prairies, meadows, and savannahs. On the other hand, ragweed comes from the genus Ambrosia with less than thirty species distributed throughout North America.

How Does the Pollen Differ Between Goldenrod and Ragweed?

Goldenrod and ragweed both contain pollen for spreading their seeds and new plant colonization, however, they differ in weight and pollination vectors.

Goldenrod has stocky, heavy pollen within its bright yellow flowers that are filled with rich nectar. Insect pollinators such as bees and butterflies are attracted to the color of the flower and the sweetness of the nectar. When they come to feed, the pollen sticks to their bodies and they spread the goldenrod’s seeds as they visit different places.

Ragweed has lightweight pollen that comes from nondescript flowers. It does not require insect pollinators because the pollen grains are light enough to be carried away by the wind. These are the pollen granules that cause hay fever because they are blown right into your nasal passages and throat to cause the itchiness of seasonal allergies.

What Is the Difference in Appearance Between Goldenrod and Ragweed?

Goldenrod and ragweed may bloom at the same time of year and grow in the same places, but they look vastly different. From their leaves to their flowers, goldenrod, and ragweed each have a distinct physical appearance.

Goldenrod plants have one continuous stem with a few branches near the top. Its leaves are singular and the flowers are small, bright yellow. The arrangement of the flowers is wider at the base of the blooming ending and tapers to a point.

Ragweed has multiple branches that grow from the main stem starting from the bottom of the plant and extending all the way to the top. The leaves of dissected or lobed and the flowers are too small to be distinguishable. The flowers are arranged in cones of consistent width near the top of the plant.

If you noticed both plants side by side, it’s easy to note that goldenrod tends to be taller than ragweed. Although both plants do tend to appear floppy under the weight of their own flowers.

What Are the Different Medicinal Uses Between Goldenrod and Ragweed?

Goldenrod and ragweed may look like just pretty meadow weeds lining the edges of your backyard, but they each have unique medicinal purposes as well. Don’t dismiss goldenrod as just being a source of food for the bees nor ragweed as the cause of agony to your sinuses.

Goldenrod has many medicinal uses, the most common of which are as a healing salve for skin wounds and steeped in hot water as a diuretic to flush the body of excess fluids. Goldenrod can help fight inflammation, especially of the throat and mouth if used as a mouthwash.

Other uses for goldenrod include the treatment of diabetes, gout, internal bleeding, arthritis, asthma, hemorrhoids, liver enlargement, and tuberculosis.

Ragweed also has medicinal benefits as it can be crushed up and applied to poison ivy rash or insect bites to help relieve itchiness. A tea made from its leaves makes a potent laxative. Other uses for ragweed include the treatment of menstrual pains, nausea, and fever.

Ragweed is most commonly the singular cause of hay fever, while goldenrod is innocent of those charges. Both plants have traditional medicinal uses. Goldenrod is a common diuretic and topical salve, while ragweed can help reduce fever and nausea symptoms.

Goldenrod and ragweed are both late summer bloomers that grow in the same places so they typically get confused with each other. But now you’ll know how to tell them apart!

Where Can I Purchase Goldenrod Seeds?

Goldenrod seeds are available at Amazon, Etsy, and many other quality seed companies.