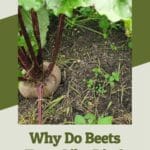 Beet, or beetroot, is packed with nutritional and health benefits, but some people still choose to avoid this powerful superfood because of its dirt-like taste. Why do beets taste like dirt? Is it normal?

Beets taste like dirt due to microbes in the soil that produce an organic compound called geosmin. Geosmin is also found in certain other vegetables and types of fish. Although the dirt-like taste of beet is perfectly normal, different cooking solutions can hide or lessen their earthy flavor.

Did you know that beet, otherwise known as beetroot, is an aphrodisiac and that it can cure a hangover? I’m sure these two reasons, alone, are enough to convince you to continue reading.

Some people like beets’ earthy taste, while others despise it. You’d be surprised to find out, though, that the fact that beets grow in the dirt underneath the ground is not the reason for their taste but rather an organic compound produced in the soil.

According to Irwin Goldman, a horticulture professor at the University of Wisconsin, the dirt-like taste of beets come from an organic compound called geosmin.

Microbes in the soil produce this organic compound. These microbes then give off an earthy or recently disturbed or wet soil smell often compared to a freshly plowed field after rained.

Interestingly enough, geosmin can also be found in other vegetables like spinach, mushrooms, and lettuce. It is even present in freshwater fish like the bottom-dwelling catfish.

It’s perfectly normal for beets to taste like dirt, as the organic compound geosmin has been around for millions of years.

The primary source of geosmin in the soil is the bacteria Streptomyces. It was found that most soils contain spores of Streptomyces.

People and animals alike are highly attracted to the smell of geosmin. According to an article from the Microbiology Society, humans are so sensitive to the scent that they can ‘smell it at levels as low as 100 parts per trillion.’

The scent is so strong it means that if you should add a teaspoon of geosmin to the water of 200 Olympic swimming pools, you will still be able to smell the geosmin. No wonder, then, that for some of us, beet taste exactly like dirt: they taste like dirt ‘cause they smell like dirt!

Can You Get Rid Of The Dirt Taste In Beets?

You can get rid of the dirt taste of beets. Apart from microwaving them, which will not help in lessening their dirt-like taste, there are different things you can try to make them taste less muddy.

Getting rid of beets dirt-like taste by boiling them

Boiling beet is one of the most effective cooking methods when it comes to lessening their muddy taste. If you don’t like the way beet taste, follow these easy steps for an improved taste:

Getting rid of beets dirt-like taste by roasting them

Another tried and tested method for ridding beets of their dirt-like taste is roasting them in the oven. You will be surprised how sweet, tender, and juicy beets can be:

You don’t need to roast only beet. By adding other root vegetables to your baking tray will also help in disguising the beets. Vegetables that go perfectly with beet are potatoes, carrots, parsnip, and sweet potatoes.

Getting rid of beets dirt-like taste by spicing them

Apart from boiling or roasting beet to improve their taste, another solution is to spice them up or turn them into something else. Check out this amazing recipe of how you can transform earthy beets into Chili Roasted Chips.

Spices like cumin and ginger are perfect matches, while herbs like thyme, rosemary, and parsley will convince even the biggest beet critic.

Getting rid of beets dirt-like taste by pairing them

Beets don’t always need to end up on your dinner table. You can quickly transform and disguise their dirt-like taste by pairing them with fruit, citrus, or other vegetables for a delicious juice or smoothie.

Place all ingredients into a juicer.

Serve up and enjoy!

Except for the honey, place all the ingredients into a blender and blend until smooth.

Geosmin, the organic compound that gives beet its dirt-like taste, can also be found in other vegetables and fish.

Apart from beet, the following vegetables are also prone to taste like earth:

Other foods that contain geosmin are certain types of freshwater fish like catfish and trout. In freshwater lakes, the geosmin is produced by two producers: blue-green algae and actinomyces bacteria.

These two producers release the geosmin into the water, which the catfish then breathe in through their gills. The water then travels through these fishes’ bloodstreams and into their flesh and muscle tissue. Hence, their muddy, earthy smell.

They can lower your blood pressure and help in the prevention of cancer, but some people won’t even touch beets if they taste like dirt. Luckily, there are various ways to lessen their perfectly normal dirt-like taste and ensure that we all benefit from these humble superfoods.