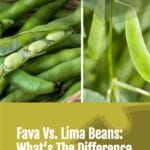 The main difference between fava beans and lima beans is their taste. Fava beans have an earthy, nutty taste with a cheesy undertone. Whereas lima beans generally have a milder, starchy flavor profile. Other differences include their appearance, texture, nutritional value, uses, and availability,

Truthfully, there are several distinct differences between fava beans and lima beans. Let’s take a good look at them!

What’s The Difference Between Fava Beans And Lima Beans?

All in all, the six differences between fava beans and lima beans include:

Let’s look at each.

Many people often describe fava beans to have a rich earthy or nutty taste with a creamy and silky texture once cooked. In addition, you might even pick up a slight cheesy undertone.

Dried fava beans tend to have a milder flavor than raw or cooked fava beans; they are often compared to chickpeas.

However, note that overcooked lima beans tend to have a harsh, off-putting taste.

Lima beans, or butter beans, are legumes varying from three to four inches in pale green pods. Most dry lima beans tend to be a creamy white to pale yellow color that turns light green when you cook them; however, several varieties vary in shades of brown, purple, and speckled beans.

Fava beans and lima beans are somewhat confusing to differentiate between when shelled and dried due to their similar appearance. However, fava bean pods generally have a bumpy appearance, while lima bean pods tend to be smooth.

In addition, you can differentiate between the two bean varieties by taking a close look at the spot where the seed previously connects to the bean pod. Whereas in fava beans, the point where the seed connects tends to be at the top corner of the bean.

On the contrary, lima seeds generally connect close to the center of the bean.

Fava beans have a firm texture that generally does not go crumbly from cooking. In addition, fava beans also have a tender yet lightly starchy texture that develops into a soft, creamy texture when cooked.

Fresh juvenile fava beans can be eaten whole while raw. These small fava beans do not require their outer coats to be peeled; you can enjoy them raw or cooked.

On the contrary, lima beans have a starchy and grainy texture, more intense than most other beans; some people dislike lima beans because of their texture.

In addition, lima beans tend to become softer than fava beans when you cook them. So, if you prefer a firmer and less starchy texture, consider trying the dries out variety as they usually have a more buttery taste when you cook them.

Unlike fava beans, you cannot eat lima beans raw; they contain a compound called linamarin, which turns into cyanide when you consume it. Cyanide prevents oxygen flow to the body’s cells, causing severe damage to organs, especially the brain and heart.

Fava beans and lima beans are legumes, meaning that both varieties are a rich source of protein and fiber.

Fava beans are particularly rich in plant protein, folate, and a few other minerals and vitamins. In addition, fava beans are packed with soluble fiber that aids in digestion and lowers cholesterol.

Although lima beans contain more calories, they are exceptionally high in manganese, which acts as an antioxidant and is vital in metabolic functions.

Here are the nutritional values per cup of fava beans and lima beans:

Even though you can eat young fava pods, the beans are generally first removed from the pod. Next, the fava beans are shelled by snapping the pod’s stem-end and pulling the string attaching the two pod capsules. Lastly, the beans are popped out of the pods.

The freshly shelled fava beans are then blanched to remove the hardy see-through skin easily. Once this process is complete, you can eat the fava bean in limitless ways, from raw in a fresh green salad to boiled or steamed, stewed, mashed, roasted, fried, or sautéed.

In addition, dried fava beans need soaking before you cook them on low heat with plenty of water. Dried fava beans are famous in stews, soups, pastes, and falafel.

Now, lima beans are a versatile and hearty ingredient. Because of their creamy texture and subtle flavor, they are perfect for a wide range of dishes and excellent substitutes for heavy starch foods like rice or potatoes.

In addition, lima beans are perfect ingredients in stews, salads, and for making dips and spreads.

Dried or fresh, both fava beans and lima beans make a dizzying variety of dishes.

Although dried fava beans and lima beans are available throughout the year, fresh, tender beans are more difficult to find year-round.

Fava beans generally start appearing in produce stores from late spring and last through most of the summertime. Make sure that you look for bright green, plump pods.

On the other hand, fresh lima beans are hard to find in supermarkets; however, if you’re lucky enough, you’ll find them during the summer.

Can You Substitute Fava Beans And Lima Beans?

You can easily substitute fava beans with lima beans. Although both varieties are interchangeable in pretty much any dish, they do have a slightly different taste.

As mentioned earlier, fava beans tend to have a more robust flavor than lima beans, so beware that fava beans can be overpowering in specific recipes.

How To Grow Fava Beans And Lima Beans?

Now that the most apparent differences between fava beans and lima beans are put behind us, we can jump into how to care for each species.

Fava beans are fast-growing and cool-weather annual veggies best planted in the early spring or fall.

Fava beans are commonly grown for their sizeable, flat, edible seeds found inside the pods or fruiting structures. Although the size and color of fava bean varieties vary quite a lot, you’ll find that fava beans’ seeds range in white, beige, brown, purple, and black colors.

The fava bean’s plant structure consists of a reasonably sturdy square, hollow stems with large foliage resembling the leaves of a pea plant. However, unlike most other bean species, fava beans are not twining climbers.

The flowers of a fava bean plant grow into white spiked clusters with dark markings that mature into thick, waxy pods that stretch to six to eight feet long and contain three to six flat seeds.

Here are the general requirements for growing fava beans:

Fava beans prefer temperatures ranging between 65 and 80°F. However, temperatures above 80°F are challenging for the plants to thrive in and are thus more prone to diseases.

Fava beans aren’t too fussy about humidity as long as they have proper soil moisture and adequate airflow.

Even though fava beans are tolerant to a wide range of well-draining soil types, the ideal soil is loose, airy, loamy soil with a slightly acidic to neutral pH.

Like all other legume species, fava beans can fix their nitrogen into the soil. Therefore, they generally do not require additional feeding.

However, a generous helping of compost into nutrient-poor soil will help to promote growth.

Fortunately, fava beans are hardy and generally trouble-free. However, hot temperatures invite a variety of pests.

The most common pests that raid fava beans include aphids, black flies, and weevils. In addition, frequent occurring problems include rust and fungal disease.

Therefore, be sure to provide plenty of space between each fava plant to ensure proper circulation.

Fava beans typically take 80 to 100 days to reach their harvest; however, this may vary with different varieties and climates.

To harvest fava beans, pick the pods individually when they’re plump by using a pair of scissors or twisting them off the plant with your fingers.

Be sure not to wait too long, or you’ll end up with beans tasting dry and exceptionally grainy.

Lima beans are warm-season crops that need to be planted in spring after the frost to thrive. These annual legumes are also known as butter beans.

Lima beans are sensitive plants concerning temperatures. They grow best in temperatures ranging between 70 and 80°F.

However, lima beans are more tolerant to slightly warmer than cooler temperatures as they aren’t frost-hardy.

Lima beans aren’t too fussy about humidity as long as they have adequate soil moisture, much like fava beans.

Like fava beans, lima beans typically thrive in locations with full and direct sun. So, aim to provide at least six hours of direct sunlight every day for lima beans to produce optimal yields.

Lima beans thrive in well-draining soil with a moderate amount of rich organic matter. However, beware of heavy clay soil as it tends to cause soggy soil, which isn’t tolerable for lima beans.

Lima beans require about one inch of weekly watering. However, they become a little thirsty during hot and arid weather, so you might have to increase the watering schedule.

Otherwise, consider mulching around the lima bean plants to keep the roots cool and to aid in retaining moisture for more extended periods.

Lima beans are legumes, and therefore, generally do not need additional fertilizer.

However, compost or manure is helpful during mid-season to provide extra supplements for the beans to grow.

Therefore, be sure to provide plenty of space between each fava plant to ensure proper circulation.

Lima beans take between 60 to 90 days to reach harvest maturity. Gently press the pods to feel if they are full before harvesting.

To harvest lima beans, pick the pods individually while holding or supporting the vine to prevent damage.

In addition, unshelled beans stay fresh in the refrigerator for up to a week, and frozen, blanched beans can easily stay in the freezer for three months. Lastly, dried lima beans keep fresh in an airtight container for one to two years.

To cut to the chase, fava beans, and lima beans have similar appearances and growth requirements. The main difference between the two legume varieties is the taste.

However, other differences, including texture, nutritional facts, and availability, tend to differentiate these fava beans and lima beans.

Nevertheless, both are healthy sources of protein that add great taste to endless varieties of meals.