I believe every homestead should be composting in some way if they are growing any food in the soil. Turning organic matter into a valuable garden amendment makes sense for the environment, for your health, and for your bank account.

“Nature demands a gift for everything that it gives, so what we have to keep doing is returning [leaves & compost materials] back to the soil, then we’re continuously giving the gifts to nature because we have a return cycle.”
― Geoff Lawton

Compost is decayed organic material that is rich in nutrients used to amend garden soil and increase microbe activity. Compost feeds the soil so plants can feed themselves.

How Does Organic Material Turn Into Compost?

Bacteria are the driving force of a compost pile. They break down organic matter and create carbon dioxide and heat. Microbes usually begin the process, but as they consume the compost materials, it causes the temperature of the pile to rise, then the heat-loving microorganisms take over. Compost can range from 100 to 140 degrees Fahrenheit as it brews.

The larger critters like worms, slugs, and insects also digest the decomposing matter, pooping out finished compost as they munch their way through. Their secretions improve compost’s texture, as smaller fragments bind together to form into larger crumbly pieces.

The Right Balance Of Greens And Browns

When adding raw organic materials to a compost pile, it’s important to balance the nitrogen-rich plant scraps, commonly known as greens, and carbon-rich leaves, woodchips, coffee grounds, and even bits of paper, known as browns. Ideally, a Carbon to Nitrogen Ratio of around 30:1, or about 3 to 1 by volume (this will depend on the Carbon to Nitrogen Ratio of the greens and browns added).

If there’s not enough nitrogen, the microbes might not be able to increase the compost pile’s temperature enough to destroy most pathogens and harmful bacteria in the finished compost. But too much nitrogen and everything working to break down the compost will not be able to handle it and will release odorous ammonia gas.

A lack of oxygen is the common culprit for other bad smells in a compost pile. Without air, the bacteria will switch from doing aerobic decomposition to anaerobic decomposition, which produces methane and other gases that can give off the horrible odor of rotten eggs.

How Big Should A Compost Pile Be, And Why?

A compost pile with a minimum size of 4’×4′ is recommended because smaller compost piles are much harder to get the carbon/nitrogen ratio balanced, resulting in smells or lack of heat. The general rule is, the larger the pile, the easier it is at maintaining a proper balance.

What Can You Compost?

Anything organic in nature will compost, but because some things are hard to balance with carbon because of the amount of nitrogen, this can result in a pretty strong odor. Also, certain things will attract varmints to your compost pile. In most cases avoiding meat, blood, and bones are best.

The material in your compost bin should have about the consistency of a wrung-out sponge. Just grab a handful of it and give it a squeeze, and you should be able to gauge the moisture content well enough to know whether to add more water or perhaps even cover it for a while to prevent more rainwater from saturating the compost.

When a compost pile has an anaerobic condition, it will generally result in slower decomposition, lower temperatures, and possible odor. This can be a potential problem with compost piles that you continue to add to before the breakdown is complete. Turning the pile will re-heat the organic material to keep it in an aerobic state, which will speed up the composting process, eliminate odors, and prevent the matting of material. You should turn over the pile at least once a week for the best decomposition and fastest compost and try to maintain temperatures from 100 to 140 degrees Fahrenheit.

When is your hot compost ready?

The finished compost should look and smell like very dark soil. It will also stop heating up.

Actually, you don’t need a bin at all, just a pile. However, most homesteaders, especially those on smaller properties with neighbors nearby, like the idea of containing or even concealing their composting operation. Depending on the design you use, it can also go a long way in keeping varmints out of your compost pile.

Let’s begin with a simple three-bay design. This is where you would divide your compost into three sections, each being at least a 4’x4’x4’ area. Many homesteaders use pallets to build this design, and they work well because they are usually 4’x4’ in size and can be picked up for free in many cases.

The way to use this design is to put your fresh mixture of greens and browns in the first bay and let them go through the breakdown process. When the pile needs to be turned, you simply use a pitchfork or shovel and flip it over into the next bay. You now have an empty first bay to start a new pile.

When the second bay is ready to be turned, you flip it to the third bay to finish the composting process. You now flip the first bay to the second bay and start again with the first. This process gives you a constant rotation of fresh compost to be used.

Another common compost bin design is commercial compost bins. The bins aren’t usually as big, resulting in harder control of temperatures and a harder balance of greens and browns. They are also more difficult to turn over, as they are usually designed with doors at the bottom to shovel from back to the top; sounds easier than it is.

As far as I can see, the biggest benefits to these commercial compost bins are aesthetics and varmint prevention. The bins are designed to hide your compost completely, which is nice for close neighbors that don’t want to see your left-over breakfast in a pile in your backyard. These units are also sealed up pretty well, making it difficult for things like raccoons and opossums to rummage through your pile.

One other type of compost bin I will mention is a tumbler. These compost bins make turning compost a breeze, but the downside is they usually don’t hold very much and can be a little messy when you’re turning if things inside are a little soupy.

This might be a new term for some of you, but let’s not overcomplicate it. The word simply means composting with worms. It’s not composting in the traditional sense as the waste is not broken down with micro-organisms, but rather the worms eat the waste and turn it into castings (worm poop).

You can put food waste and trash to good use as compost no matter where you live. You can compost with worms inside your home if you need to. Vermicomposting is a way to compost in the winter and creates a valuable product for seed starting and the garden.

I’m not going to give you a step-by-step on how to build a DIY worm bin as it would probably be difficult for me to put it all into words, and there are many great instructional videos online showing the process. I will, however, point you to videos that build a simple system using either 5 to 10-gallon Rubbermaid totes or 5-gallon buckets.

Simply do a search for worm bins using these items to get started. If you would like to build a better and more complex design that is easier to harvest castings from, search for flow-through vermicomposting bins.

I built a larger vermicomposting bin using an old bathtub and pallets which makes a lot of worm castings and makes it easier to collect the worm juice. The liquid produced as a byproduct from the worms eating the waste in the bin is a fantastic garden fertilizer and can be easily collected from the bathtub drain with a bucket placed beneath.

You can also purchase commercial worm composting bins. Some popular designs are; The Urban Worm Bag, Can O’ Worms, and the Worm Wigwam Worm Factory 360. 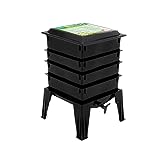 The ratio here is different than hot composting because you are providing worm food rather than microbe food. When you feed worms always try to add equal portions of greens and browns.

The greens can be vegetable and fruit scraps, bread, pasta, coffee grounds and filters, teabags, and dead plant matter from houseplants. The browns can be paper, junk mail, paper egg cartons, cardboard, and dry leaves. Try to avoid salty foods, citrus, spicy foods, oils, prepackaged foods with preservatives, meat, and dairy products because they attract flies and can cause the vermicompost to smell bad.

Use The Right Kind Of Worms

While there are a few varieties of worms you can use for vermicomposting, Red Wigglers are the most readily available and do a great job. Earthworms will not work!

Just like regular composting, the appropriate moisture needs to be about as moist as a wrung-out sponge. This is easier to maintain by using a weekly feeding schedule rather than adding to the bin daily or even after every meal.

The optimal feeding conditions for your worms range from about 60 to 75 degrees F. Below 50 and above 85, and you risk worms dying. This is one reason these systems work well indoors year-round.

However, you choose to compost your waste products the important thing is to just get started. The benefits to the planet, your homestead, and specifically your soil will be worth the efforts.