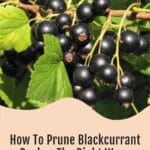 The growing and importation of blackcurrants and other currants were banned in many parts of the US for almost a century as they were believed to help spread a fungus that threatened the pine tree timber industry. Regulations were gradually lifted in many states starting in 2003, and now this tart fruit is grown in many parts of the country.

To prune a blackcurrant bush the right way, prune around 35% of the dormant bush each Winter, removing thick, dark stems, which are three-year-old growth. Cut very low down, at roughly a 45-degree angle, to prevent water rot. Prune away all damaged branches, those growing laterally, and stragglers.

Blackcurrant bushes have no thorns, which is excellent news for most people, as they can be easily pruned without having band-aids in every pocket. Good pruning will convert a straggly bush into a hard-working blackcurrant factory producing wonderfully tasty fruit for years to come.

How To Prune Blackcurrant Bushes The Right Way

Depending on which growing zone you are in, the optimum time to prune a blackcurrant bush is in December (July in much of the Southern Hemisphere) or when the bush is dormant and no longer in production.

Unlike many other trees and bushes, you thin out the bush when pruning blackcurrants instead of cutting branches back.

Prune very low to the ground (say six inches / 15cm above the bottom) and, using sharp secateurs or lopping shears if the branches are very thick, cut at around 45 degrees. This will result in water running off the cut edge instead of pooling and rotting the stem.

Remove all branches growing laterally, but leave those growing almost vertically. Lateral branches clutter the harvesting area, making access very difficult if there are enough of them. This can create a ‘dead’ space within the bush where airflow is compromised, encouraging mildew and other diseases to take hold.

When pruning, do so heavily, removing perhaps a third or even slightly more of the shrub. This leaves much air and light for fruit production and gives the bush a healthy environment for optimal blackcurrant growth.

Fruit is produced on one and two-year-old branches, not older ones, so prune the older branches off first. These are the noticeably darker branches, with rougher skin that often splits across the branch, resembling the healed wound from an old cut.

Next to go are damaged or broken branches that are susceptible to disease and those tiny stragglers lying almost horizontal just above the ground.

Even with branches that are growing upwards, those that cross one another should be pruned for ease of harvest. Remove the oldest of the two that cross. A good rule of thumb is to retain eight to twelve of the best young stems for a good, healthy crop.

The annual prune period is an excellent time to take blackcurrant cuttings to propagate other currant bushes. Propagation of currants from cuttings is easy, quick, and relatively efficient. Do your pruning and your cuttings as part of a single task, promoting efficiency, and you will have less clean-up at the end.

Use secateurs to prune off a 6-12″ / 15-30cm long shoot of recent growth, or, even better, trim any healthy shoots that you have already pruned off to create airflow. Remove the soft tip, cutting diagonally just above a bud to let rain drain off quickly (and show which end is up when planting the cutting).

Cut roughly horizontally just below a bud,  thus forming the base of the cutting. You can dip the cut end into hormone rooting powder if you wish, but it’s not usually necessary for currants. After removing any buds to give the cutting the best chance to grow, you can push the stick into a prepared hole and tread the area down.

A period of two or perhaps three years wait for your first fruits from plants grown from cuttings is perfectly normal, as opposed to one or two years from one-year-old purchased plants.

Fortunately for beginner gardeners, the blackcurrant is a good shrub to learn on as it is hardy and forgiving, providing you adhere to these basic methods.

Be aware that if you prune your blackcurrant bushes correctly, they grow more robust and produce 10-15 LB / 5-7kg of fruit each year. Unless you do a lot of canning or have hungry neighbors, two or three plants may be more than sufficient. Some of the smaller cultivars can be grown in containers, though you might limit the yield in this case.

Correct planting with initial pruning is recommended as most of the fruit is born on the previous year’s stems. Out with the old, in with the new applies perfectly to blackcurrant bushes.

During the colder months, while plants are still dormant, currants are sold bare-rooted and in near-perfect transplanting conditions. In frigid zones, you might prefer to wait until the ground thaws a little before purchasing bare-root plants.

Blackcurrants have a strong growth surge quite early in Spring, so don’t delay planting for too long, but if you can get your spade into the ground without chipping a tooth on the rebound, you’re probably good to go.

Currants do cope with partial shade, but adding a sunny spot to the formula will yield sweeter-tasting fruits in cooler climes, so bear this in mind when laying out a space to grow them. Blackcurrants prefer well-mulched, nutritious, and slightly acidic soil but never let it dry out completely. Hotter zones, like Australia, South Africa, Arizona, etc., may require the erection of partial shade where possible.

In preparation, soak bare-root plants in water for three or four hours before planting to re-hydrate them. I always recommend a hole at least half a yard across for any shrubs and bushes, which will later be filled around the roots. This will give the root ball ample room to expand in looser soil.

You might care to consider leaving access space of around 4′ between plants. This prevents dead-air areas and assists with harvesting.

Mix well-rotted compost or manure (vermicompost is excellent but a little pricey unless you create your own) plus a handful of general organic fertilizers like bonemeal or fish, blood, and bone into the excavated soil before returning it to the hole.

Place the bush slightly lower in the hole than its previous soil level (which can be noted by a darker line on the stem.) Return the enriched soil mix to the hole and tamp it down firmly around the stem. This will squeeze any air in contact with the roots away, but water well to further settle the soil.

Prune all of the shoots back, leaving only a single bud above the soil, and mulch with more compost, manure, or other organic matter. Wood chips, straw, or sawdust work perfectly.

During the first year, give a general-purpose liquid fertilizer feed every month and keep the plants well-watered. Start winter pruning in their second year. Open the bush’s center into a cup-like shape to give good airflow through the bush and aid fruit harvesting.

Tread the plant’s root area down in each Spring to stop them from rocking if they have been lifted by frost. Add about 100g of good general fertilizer and a thick mulch of well-rotted manure or compost each Spring.

In Summer feed with liquid tomato feed or a seaweed feed. A mulch of comfrey is always a good idea.

Like any plant, shrub, or tree that you are growing for a yield, blackcurrants have some natural pests, and it’s always a good idea to be forewarned so that you can react quickly in the event of an attack.

Blackcurrant Big Bud Mites are microscopic, much less than 1mm in length. They live inside the dormant buds and suck sap from the embryonic leaves. Large infestations of Big Bud Mite can markedly reduce the vigor and yield potential of blackcurrants. They cause infected buds to swell abnormally.

The Big Bug Mites can transmit a virus-like mycoplasma disease called reversion. Reversion  occurs when a cultivar known for a particular color, leaf shape, or other characteristics ‘reverts’ to a form found in the plant’s recent parentage

Most gardeners are particularly fond of wildlife in general and bird life in particular, but getting raided by a flock of fruit-eating members of the avian species can undoubtedly raise one’s blood pressure. Unless deterred, birds can (and probably will) decimate your patch of blackcurrant bushes.

Use shade-cloth with a lower shade percentage or drape bird-cloth over each shrub, gathering it in at the bottom, or the wilier birds will climb up on the inside and feast. Scarecrows and movement-based deterrents only offer limited success.

I have seen large swathes of farmland covered in blackcurrants, and unless you have a large workforce, covering each bush in cloth is not practical, nor is it economical. You may care to intersperse the blackcurrants with redcurrants, which appear far tastier to birds, probably because of the bright, attractive color. Very ecologically friendly.

The good news regarding pests and diseases is that blackcurrant is very hardy and is seldom overcome by pests if sensible precautions are taken.

Frost can be a problem, particularly with early-flowering varieties in the Northern regions.

When To Harvest Blackcurrants

The easiest way to harvest modern varieties is to cut whole fruit trusses, aka strigs, once the blackcurrants have turned purply-black.

Blackcurrants are a bit tart and are an acquired taste when eaten raw, but eat harvested fruit within a few days of harvesting or freeze the currants. Alternatively, blackcurrants can be frozen, cooked, or made into smoothies, jello, or jelly.

How to Prune Red and White Currants

If you decide to intersperse your blackcurrants with red or white currants, for avian control purposes, you will need to know how to prune these also, as the task is very different from blackcurrants:

Unlike the black cultivar, red and white currants are not generally grown as stools but rather on a short ‘leg.’ Remove any shoots or buds found sprouting from the first 4″ / 10cm above the soil to maintain said leg.

Reds and whitecurrants fruit at the base of lateral shoots growing out from main branches.

On one-year-old bushes, you might prune back any new shoots by around half. Cut a bud that faces outward to guide the growth direction of the next branch, even before it forms.

Pruning above an inward-facing bud will result in a tight ‘bowl’ in the center of the bush. On branches that droop low, an upward-facing bud is preferable to one which faces outward. The following Winter, prune new leading shoots by 50%.

Once the growth reaches full size, the job of pruning becomes simpler. Each Winter, prune the previous year’s growth back to just one bud. Remove all branches that have become unproductive or are damaged, and replace them with new shoots to assist with the shape of the bush. Remove any branches low to the ground, as the fruits may rot or be eaten by pests.

As mentioned, blackcurrants can certainly be eaten raw but are usually cooked in sweet or savory dishes. They are lovely in jellies, preserves, and syrups recipes and are also grown commercially for the emerging juice market. Blackcurrants are also used to make alcoholic beverages and dyes.

Blackcurrants make a wonderful addition to your pantry and are incredibly high in Vitamin C, as we have learned. Plant them well and take the time each Winter ( 15 minutes per bush at most) to prune them correctly, and they will keep your larder stocked well into the future.